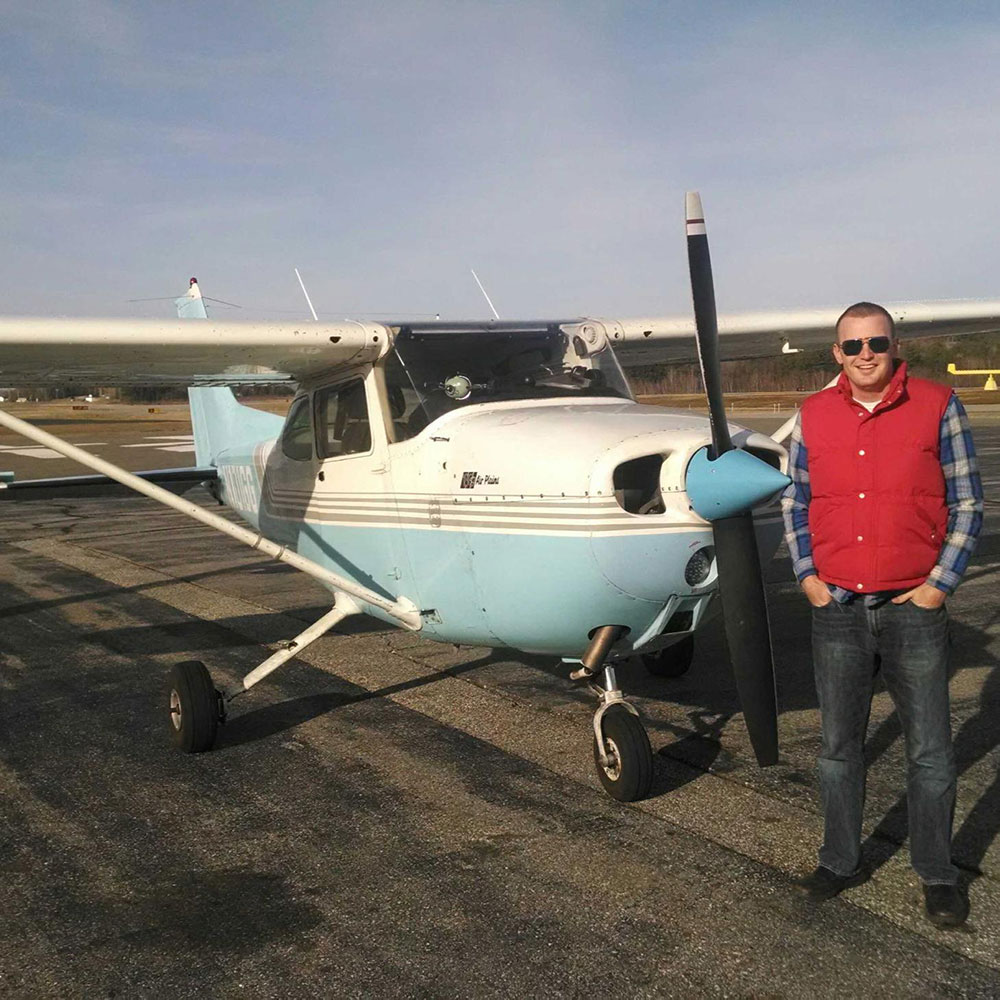 Always having loved aviation and having served in the U.S. Navy as an Aviation Structural Mechanic, the journey of Learn 2 Fly CT began when Phil ran into a high school friend while working at Bradley International Airport after his military duty.

It was that chance encounter that convinced Phil he needed to pursue his passion for flying. He went home that night, changing colleges to pursue a degree in Aeronautics and beginning flight training at nearby Simsbury Airport shortly after – earning his Private Pilot Certificate within 3 months and a Bachelor of Science in Aeronautics from Embry-Riddle Aeronautical University Worldwide.

After his own journey to become a certificated pilot, Phil noticed the region lacked affordable flight schools where students could get quality training and learn how to safely fly an aircraft. His goal was to start a flight school where based on quality instruction, a constant focus on safety – while maintaining affordability, and thinking “outside the box” for bringing the Flight Training industry into the 21st century.

Our philosophy is that the key to eliminating aircraft related incidents and accidents is staying current on training and maintaining proficiency with all aspects of the aircraft and flight procedures. Our mission is to ensure you enjoy your time in the air – and return home safely to your loved one’s after every flight.

Learn 2 Fly CT, LLC. operates out of multiple locations in Connecticut.
We are proud to be a veteran-owned and operated small business. 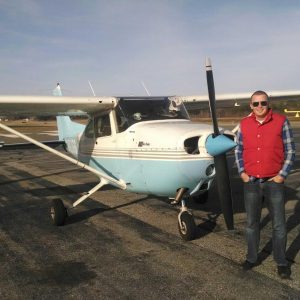 Phil Smith has turned his life-long passion for flying and turned it into his career. As an Aviation Structural Mechanic, he worked on P-3 aircraft on the Whidbey Island Naval Air Station located in Washington state. It was there Phil learned aircraft inside and out during his 4 years of active duty in the U.S. Navy.

After completing his assignment, Phil returned home to Connecticut where he worked at Bradley International Airport (KBDL) servicing aircraft. This provides Phil with a unique perspective having worked on both civilian and military aircraft.

During the day, Phil works in Operations at Gama Aviation in Shelton, CT in addition to his role as Chief Flight Instructor at Learn 2 Fly CT. 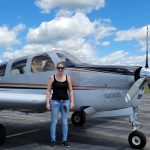 Hello my name is Kat, I’m a career CFII and have been instructing since November 2019.
I got my private license in the UK back in 2015, since then I moved to the states where I finished off my pilot certification under the FAA. I started instructing out of Morristown airport; where I became chief instructor at that school. Since I have been an instructor for longer that 2 years, I am able to do certification and ratings up to  and including, CFI and CFII. 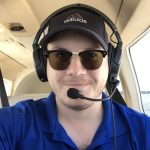 Dave has always had an obsession with planes and a desire to fly but never thought it could be attainable as a career. After graduating from the University of Connecticut with a degree in accounting, he worked as a financial statement auditor in Boston. He was not happy with his current career path.

It wasn’t until his girlfriend purchased an intro flight for him on his 31st birthday that he decided to pursue his dream job. Dave enrolled at ATP flight school in Hartford where he completed his private pilot, instrument rating, commercial pilot, CFI and CFI-I. He is currently finishing his commercial multi engine training.

Dave is super excited to share his love of flying with students at Learn 2 Fly CT, and hopes to help others achieve their dream of flying. In his spare time, he enjoys listening to live ATC feeds and long walks on the beach. 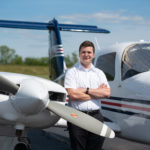 Starting at a young age, Kevin began flight training at Northampton Airport MA. working most days while in highschool to afford 1 flight lesson every week. In 2016 Kevin earned his private pilot certificate. What he thought was the end of his training, turned out to be the beginning of much more.

Unsure how to move up the ladder Kevin got a job at a local airport as a line service technician to become more familiar with the aviation industry. In 2018 Kevin went as a full time student at ATP right here in Hartford where he earned his IRA, CSEL, CMEL, CFI, CFII, and MEI. After graduating he was hired and soon promoted to the Lead Flight Instructor.

At ATP he met his Fiancé Beckie who drove his inspiration to be all he was meant to be. Shortly after New Years in 2020 Kevin became a First Officer at Republic Airlines. Achieving a Restricted ATP due to his age. (It is never to soon, or too late to achieve your dreams)

Now after training he is back at home wanting to continue instruction to help those we want to follow the same or a much different path. Whether you are wanting to fly the big iron in the airlines, get a commercial pilot certificate, or just fly for fun with a Private/ Sport pilot certificate Kevin can help lead the way. Off duty Kevin enjoys Photography and being a family man, flying/driving on adventures with his lovely Fiancé all over the North East. 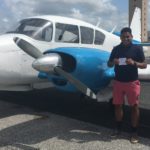 Since kindergarten, Eli has dreamed of flying airplanes and a career in the sky. Once out of high school, he began his flight training right here in Connecticut at Brainard airport while attending community college. After earning his private pilots licence, he transferred to Southern New Hampshire University to complete his Instrument rating and Commercial pilots licence while earning a Bachelor’s degree in aviation. After this, Eli went down to Punta Gorda, Florida to complete his CFI, CFI-I, and multi-engine ratings. After leaving the Northeast, he knew he had to come back because nothing beats flying up here in all four seasons.

In his free time he enjoys skydiving, learning more about flying and golfing with his friends. He Is extremely excited to share his passion and help others chase their aviation dreams. 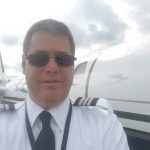 David has always had a passion for aviation. All of his careers are involved in some form of aviation from fueler and deicer at Corporate Air based at Bradley International, at Space and Sea Systems working on the International Space Station and Space Shuttle to now working as an engineer at Pratt and Whitney designing turbine airfoils.

Additionally, David is an avid hockey player and coach. He has coached hockey for over 30 years in the USA, Canada, Scandinavia and Europe. He has instructed at all levels from learn to skate to junior hockey.

David was not able to pursue his love of flight until later in life. In 2012 he decided to pursue his dreams and took a discovery flight. Since then he has never looked back and obtained his Instrument, Commercial, and Multi Engine. In 2019 David wanted to combine his passion of coaching and flying. Later that year he obtained his Certified Flight Instructor rating.

In David’s free time he enjoys sailing, hiking, and archery. He lives in Ellington with his wife and 2 daughters.

Wooram is from S, Korea. He moved to the U.S. to achieve his dream to be a pilot. He graduated from Utah Valley University School of aviation science. He received B.S and magna cum laude in Professional Pilot. He served in the military in S, Korea. He was in charge of the air defense team. N, Korea has a lot of AN-2 airplanes. Those are covered by fabric and fly lower to avoid radar. His duty was monitoring those airplanes in the air and prohibited airspace. He was also a squad leader and firearm training instructor. His background leads him to be a flight instructor now in aviation.

His dream is to fly internationally between S, Korea, and the United States so that he and his wife can live in both countries where they come from. 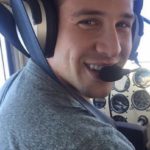 Chris McKenna has always loved aviation.  The story his parents always tell is that his first word was airplane and he would point to the sky anytime one flew over.  Chris took his first flight way back in 1993 as a young child with his cousin Lisa, who would go on to be an American Airlines pilot, and it set the tone for the rest of his life.
After nearly 20 years of playing flight simulators, Chris decided to take lessons starting in 2015 while working full time as a middle school teacher.  Despite enjoying teaching, he knew that his true passion was aviation, so he took the risk to leave his career to pursue full time flight training.  He now can’t think of any better decision he could have made.
Chris is a graduate of The University of Connecticut (B.S. Geoscience 2013, M.A. Education 2016), and resides in Connecticut.   In his free time Chris enjoys skiing, hiking, playing with his 3 year old dog Stella, spending time with his girlfriend, friends and family, and video games. 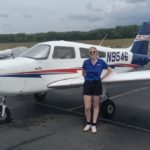 Alex is a CFI and CFI-I from Atlanta, GA. Growing up with both parents in the aviation industry and experiencing the joys of flying from a young age, Alex quickly realized she would follow in her parents footsteps. After graduating from the University of Georgia with degrees in Spanish and Linguistics, Alex moved to New York City to work as a flight attendant.

After 3 years of working as a flight attendant, Alex knew her next step would be to get into the flight deck. Given the opportunity to take a leave of absence from work, Alex was able to pursue her goals and begin training to be a pilot. She is excited to share her love of flying and the aviation industry with her students and can’t wait to help others achieve all of their aviation goals.